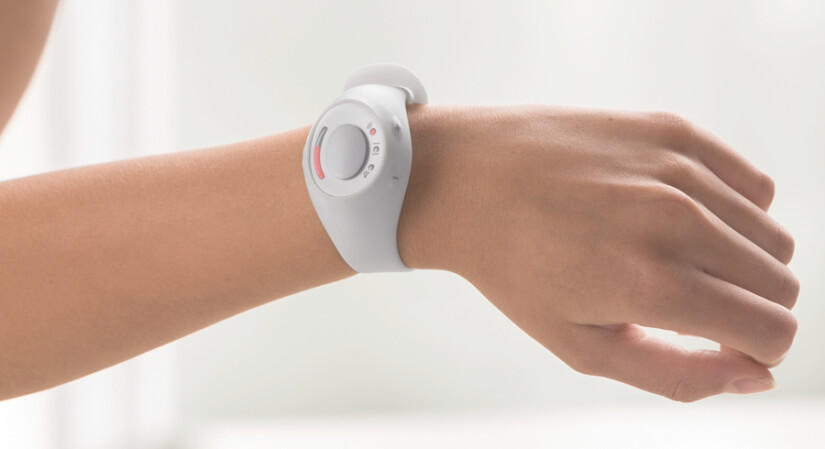 There’s only one way babies have to communicate with us: by crying.

A crying baby could mean anything from “I’m hungry!” to “I’m sleepy!” – or it could even mean it’s time for a diaper change or that they’re getting sick.

I recommend everyone has a baby monitor in their home; they make it easy to keep a watchful eye over your little one when you’re not around.

Unfortunately, most manufacturers fail to accommodate the deaf community when it comes to their baby monitors. Luckily, there are a few great options that should work for you.

Thanks to MomTricks reader Marissa, we have a great recommendation for hearing-impaired parents: The Summer Infant Babble Band!

This is a wearable monitor that you put on your arm, and there’s a base unit that you put near your little one.

You can set up the band so that it either vibrates, lights up or both when your child cries or makes a sound. They claim that you get 8 hours of usage on the band between charges on the included rechargeable battery, and the base doubles as a charging unit too.

The downside of that is that if your child sleeps more than 8 hours, the band is going to run out of juice. At least they included modern wireless charging with this one; you can just set the band on the charging stand and it charges without having to plug it in.

When your child cries, the base unit sends a signal to the wearable band. If you have it set in vibration mode, it will vibrate for 8 seconds. This is way more than enough time so that you’re always going to notice it.

Most people claim that the monitor is very sensitive, and should always pick up the noises your child makes. However, I did see one person say that it was too sensitive and alerted the parents to background noise. However, I think that unless you live in a particularly noisy home, it should be fine.

For those that are worried, it is securely paired, meaning that no one else will possibly be able to listen in on your monitor. I realize that has been a concern in the past, but modern baby monitors are meant to be secure.

The biggest complaint I’ve seen about this monitor is the battery life. 8 hours really isn’t a long time, and it would have been nice if they’d included a separate charging stand instead of requiring you to go to baby’s room to charge it.

All in all, however, this is a pretty good solution for deaf parents and I’d recommend it.