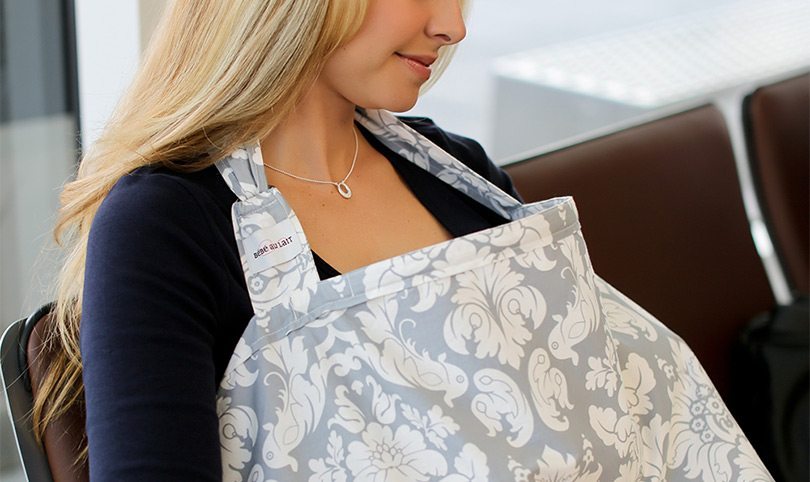 Breastfeeding likely isn’t exactly something you’re comfortable doing in public. Even if you don’t mind other people doing it.

It’s hard for some of us to be totally comfortable with doing it with strangers around, and that’s a drag. Everyone should be able to breastfeed as they need to, and it’s a shame that not all of us are able to.

A breastfeeding cover is one solution to this problem; they give privacy and a feeling of security while doing it in public, or even just around family or friends.

Of course, on the flip side it’s not as discreet, but it does cover you up, and that’s what’s important.

Some Pointers Before You Buy

Let me get one thing out of the way quick: get a cover that is low-key without any garish or gaudy designs. Nursing covers already draw attention, and if you have one with pink flamingos and stripes all over it, you’re only going to make matters worse.

Ask ten moms which nursing cover they have and nine of them will tell you Udder Covers (click here to see them in all 7 designs).

Everyone loves these things! Are they worth it, though? You bet they are.

The material is 100% cotton, and it’s very breathable which is a godsend in the summer months. You’re gonna be dying if you have something made out of a synthetic material, believe me.

It’s also machine-washable, so you can throw it right in with the rest of the laundry.

The genius of the Udder Cover is that the neckline is rigid instead of floppy, so you can have a direct line of sight with your baby as you feed.

Not all covers have this, which makes the Udder cover stand out. Try feeding a squirmy baby with a cover that flops around. It’s almost impossible.

The patterns available are also cute. I’m so sick of gaudy-looking patterns on covers and diaper bags. Why does everything need to be so ugly?!

I like most of the designs available with the Udder Covers, but a few of them aren’t great. You’ll still probably find one you like, though.

The top-tier option is the Dria Nursing Cover (click here to see the price).

It’s technically a breastfeeding poncho, meaning you can wear it as a top and not need a separate thing to carry around with you.

It actually looks really stylish, making it pretty awesome and a great option for those willing to spend a lot more money on a nursing cover solution. While most covers look more like a table cloth, this one could pass for a fashionable jersey-style t-shirt.

It’s made of 100% modal and it feels super light and comfy to wear. Even though it’s a synthetic material, it’s very breathable. It’s also very stretchable and won’t lose it’s shape at all.

What I like about the Oslo is that it won’t wrinkle at all. You can roll it up into a ball and stuff it in the diaper bag, pull it out 2 hours later and it won’t have a single wrinkle. It also doubles as a stroller cover or snuggle blanket!

The only real downside is that the material makes it tricky to keep an eye on your little one while you nurse because there is no structure to the collar section. It’s not that big of a deal considering how nice it looks.

Other Secondary Upsides of Nursing Covers

Not only do they give privacy, but they serve a few other purposes, too.

Milk overflow can be an issue; this is when your breasts leak milk due to being overfull.

It’s especially a pain when you’re feeding your baby with one breast and the other one is leaking, especially if you’re feeding in public. A nursing cover can help you avoid the embarrassment while you deal with the mess, and the first time this happens and you have a cover to help, you’ll be thankful you have it.

Slippery babies can also make things a challenge when you’re trying to feed. This usually happens because they’re distracted by what’s going on around them, both noises and sights.

If you use a cover, it blocks out all of this extra sensory overload going on around them and can help a lot if you have this problem.

Just something to consider.

The Downsides of Nursing Covers

It’s not all positive when it comes to these covers, though.

For one thing, they do draw more attention. If you get good at nursing and have small boobs, you can probably do it discreetly and without many people noticing. However, if you use a cover, it will draw more attention, but you are covered up. It’s a trade-off, and I think it’s worth it, but not all moms do.

The other downside is that it can make breastfeeding more difficult when you first start out and neither you nor your baby is used to it. Getting them to get a proper latch can be difficult, especially if you can’t directly see what’s happening.

Read More
Guidelines on how to safely store your milk.
Read More
6
0
209

Read More
It's not all flowers and sunshine.
Read More
2
0
0