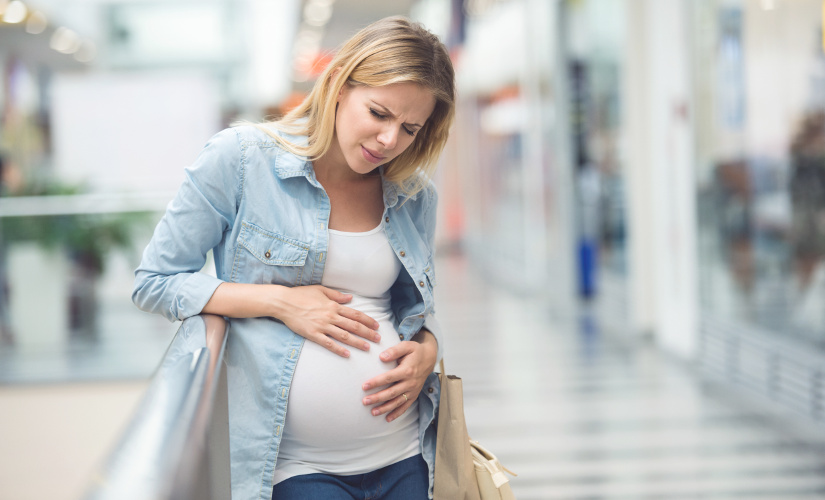 Can You Get Your Period While Pregnant? Or Is It Something Else?

The short and scientific answer is:

No. You cannot get your actual period at the same time as being pregnant.

That doesn’t mean that there are no other things going on with your body, that look and feel just like your period but actually may not be.

Why Can’t It Be My Period?

A period, or menstruation, is the shedding of the lining of your womb. It happens each cycle roughly 2 weeks after you ovulate (release an egg).

During that 2 weeks it’s like your body is preparing to house a baby in the womb. If your hormones signal no baby, then the body sheds all that preparation and you get your period.

If the hormones signal that there is in fact a little bean implanted in the womb, then no shedding or period will occur, because if it did your baby would be lost.

So if you are definitely pregnant and implantation of the cells that make a baby has happened, then your body will not have its regular period, and any bleeding you are seeing could be caused by the following instead.

Here are some common reasons why women who are pregnant might see bleeding early in pregnancy and mistake it for their period:

1. Implantation Bleeding: This is when you have released an egg and it has been fertilized by a sperm, making a bundle of cells known as a zygote.

This bundle travels to the womb in the two weeks after ovulation and implants itself deep into the tissue. This process of implantation can cause both cramps and bleeding – sometimes mistaken as a period because it can happen as late as one or two days before you were about to have your period.

2. Chemical Pregnancy / Early Miscarriage:  When you fall pregnant your body makes progesterone and hCG, two hormones that signal the rest of the body that pregnancy is happening.  It takes time, and sometimes there are low levels of the hormones at the very beginning.

If the level is too low, then the zygote won’t implant and you won’t get pregnant – this is known as chemical pregnancy or threatened abortion.  At this point you could even get a positive pregnancy test.  It has been postulated that as many as 75% of all early pregnancies end this way, many without the woman even knowing.

3. Break Through Bleeding: This happens when the same pesky pregnancy hormones essentially mask your monthly period, so some bleeding can occur around the same time as aunty flow would usually make an appearance.

But the important difference in these scenarios is – This is light bleeding, not enough to fill a pad or tampon, and the color is usually light pink or brown.

FACT: Studies have shown that 20-30% of all women experience light bleeding or spotting during early pregnancy.

For this article we are classing early pregnancy as the first few weeks, and any bleeding experienced after that would fall into this category.  It still isn’t your period; despite tales of women who experience bleeding every month during pregnancy, it simply is not possible to shed the entire lining of your womb without losing the baby.

Miscarriage: Unfortunately, not all pregnancies make it to full term.  There is a myriad of reasons why miscarriage happens, but bleeding after the first few weeks, when implantation has happened, can be a sign that the fetus is being miscarried.

Often this bleeding will be bright red, is enough to fill a pad in one hour, and can be accompanied by sharp pains. Read more here about the different types of miscarriage and their symptoms.

Subchorionic Hemorrhage (Hematoma): This happens when pockets of blood accumulate between the placenta and the uterus, in the folds of tissue called chorion.  It can cause spotting or bleeding that can be bright red in color.

Often, the woman will think this is a miscarriage, but actually these bleeds resolve themselves in most cases, by the end of the first trimester.  Around 1% of all pregnancies will be affected by this type of bleeding, according to BabyCenter.

Ectopic Pregnancy: Sometimes the fertilized egg can implant itself somewhere other than in the uterus – like in the fallopian tube (most commonly), or the abdomen or cervix.

When this happens, the cells begin to grow and cause pain and bleeding.  This bleeding will likely be bright red and very painful.  Left untreated, this situation can actually damage your chances of future pregnancy, so it’s very important to get to the emergency room right away if you think this is happening. This article from The National Health Service in the UK, has more information on the symptoms of ectopic pregnancy.

Molar Pregnancy: According to Mayo Clinic, dark brown to bright red bleeding accompanied by the passage of cysts and possible vomiting, may be a sign of a molar pregnancy or hydatidiform mole.

This is when the fertilized egg grows abnormally and the placenta becomes a mass of cysts, like a benign tumor. Sometimes there are some normal cells and sometimes all of the growth is abnormal, but unfortunately either way this is not a viable pregnancy.  This is another situation where immediate medical attention is needed to prevent damage to the reproductive system.

Finally, there are some types of bleeding that can happen any time during pregnancy and are not necessarily as much cause for concern:

Infection: An infection such as a urinary tract infection can cause bleeding.  It’s definitely something to be monitored and treated by your doctor, but it’s not an indication of any problem with the baby.

Sex: Having intercourse during any time of the pregnancy can cause some spotting afterwards.  This is because the blood supply to the cervix is much more than normal and it is sensitive, so any banging against it may cause some irritation.  This will not cause any harm to your baby!

Examination: During the many routine appointments involved with a pregnancy, your doctor may want to examine your vagina or cervix. This might be to take swabs to send to the lab, or to see if you are beginning to dilate later in the pregnancy.  Touching the cervix can cause some light bleeding due to the extra blood supply, and they should warn you that this can continue for up to 24 hours after the exam.

What is evident from the above information, is that in most if not all cases, it is best to seek medical help if you are bleeding and you don’t think it’s due to a normal period.

If you are trying to conceive or you know that you are pregnant, and you experience any of the above, then a call to your doctor’s office is the best thing.

In some of these situations, especially if you are filling a pad or a tampon with bright red, painful bleeding, in less than an hour, you may also need to visit the nearest emergency room.