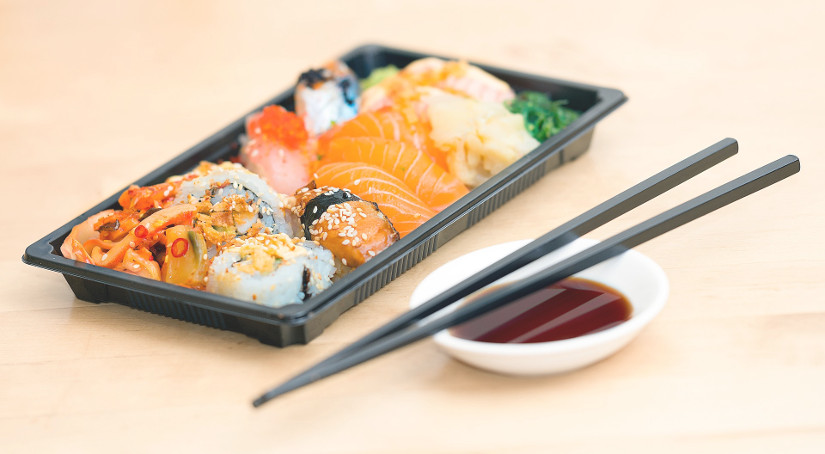 Is It Safe To Eat Sushi While Pregnant or Breastfeeding?

The facts on eating this Japanese delicacy.
Total
1
Shares
1
0
0

When you’re pregnant, you’re being healthy for two.

Your diet now affects you and your growing baby. But it seems like there are so many food rules to follow: limit your dairy and caffeine, avoid deli meat and soft cheeses, and don’t even look at alcohol and sushi.

My husband and I love sushi! In fact, it’s our go-to date night treat.

While I was only introduced to the marvelous tastes of it a few years ago, I’ve become adept using chopsticks and fearlessly order rolls with eel, spicy tuna, and tobiko.

Then I became pregnant, and sushi is usually near the top of the list of things-pregnant-women-can-no-longer-eat. No spicy tuna rolls for nine months? What was the big deal?

It turns out there is a lot of research about pregnancy, your baby, and sushi. Here’s what you need to know.

The word sushi is used as a catch-all word for several different Japanese dishes. While there are many different variations of these dishes, the three main types Americans eat are:

It’s important to remember that not all sushi has raw fish. Most restaurants offer vegetarian options that substitute raw fish with ingredients like egg, avocado, and cucumber.

Why is sushi bad?

Pregnant women are told to avoid sushi for two reasons:

Both the Center for Disease Control and the Food and Drug Administration recommend that pregnant women avoid eating raw fish because of the potential for bacteria, viruses, or parasites to be transferred to your baby.

Your immune system is weakened during pregnancy (so your body will accept your growing baby), and this increases your risks of food poisoning, which can lead to major health problems.

Raw fish (really any meat not completely cooked) has the potential to make you and your baby sick.

When people talk about sushi and pregnancy, it’s mostly about the risks of mercury consumption.

All fish and shellfish contain some level of mercury, but you only need to worry about fish with high levels.

Swearing off fish isn’t a good idea because they are a source of vital nutrients essential to your baby’s development.

What’s the big deal with mercury?

Mercury is a naturally occurring mineral that by itself isn’t bad.
However, mercury is unnaturally released into the air by certain types of industrial manufacturers and plants.
Discarded items such as thermometers and fluorescent lights can also release mercury into the ground.
Mercury travels from the air and the ground into water, where fish absorb it. And when you eat the fish, you absorb the mercury.

Consuming high levels of mercury is bad for anyone, but it is especially bad for developing babies. Many studies have shown that exposure to even small doses of mercury can impair a baby’s growing brain and nervous system.

According to the Environmental Protection Agency exposure to mercury can affect your child’s memory, motor skills, and vision.

Not all fish have the same levels of mercury.

The American Pregnancy Association has provided a detailed list of the different fishes used in sushi and their mercury levels.

You’ll want to avoid fish that contain high levels of mercury or other toxins like swordfish, mackerel, fresh tuna, mahi-mahi, and shark.

Can I still eat fish?

Yes! Fish is an important part of a pregnancy diet as it’s the best source of omega-3 fatty acids.

It is recommended pregnant women eat 8 to 12 ounces each week of fish that are low in mercury, like shrimp, salmon, pollock, trout, catfish and canned light tuna.

Omega-3 fatty acids found in fish are extremely beneficial to your baby’s development and have been linked to higher intelligence.

However, cooked fish still contains mercury, so you’ll still want to avoid tuna, swordfish, mackerel and the rest of the high-mercury species.

Can I eat sushi while breastfeeding?

Yes! Now that you’re done being pregnant, all those foods you weren’t supposed to eat can now be added back into your diet.

That includes sushi! However, you should still be wary of eating too much mercury. It’s less likely to cause harm when you’re breastfeeding, but mercury can still make its way into your breast milk, so you should continue to avoid fish/sushi high in mercury.

Make sure you’re eating sushi from reputable restaurants where you know the food is being handled safely.

While there are many foods you can begin to enjoy again after giving birth, if you’re breastfeeding you still need to consider the effects to your baby.

There are many cultures around the world where sushi is a main part of their diet, and they don’t remove it while pregnant.

However, it’s wrong to ignore the research on the potential effects to your baby. Make sure you are well informed so you can feel confident in your decisions.

The bottom line is this: eating sushi doesn’t necessarily mean you’re causing your baby a problem, but it does contain a risk.

It’s up to you to decide if it’s worth it. If you want to take the better-safe-than-sorry approach, then stick with cooked fish.

But don’t panic and judge if you see a pregnant woman sitting at a sushi bar. She could be eating a cucumber roll!