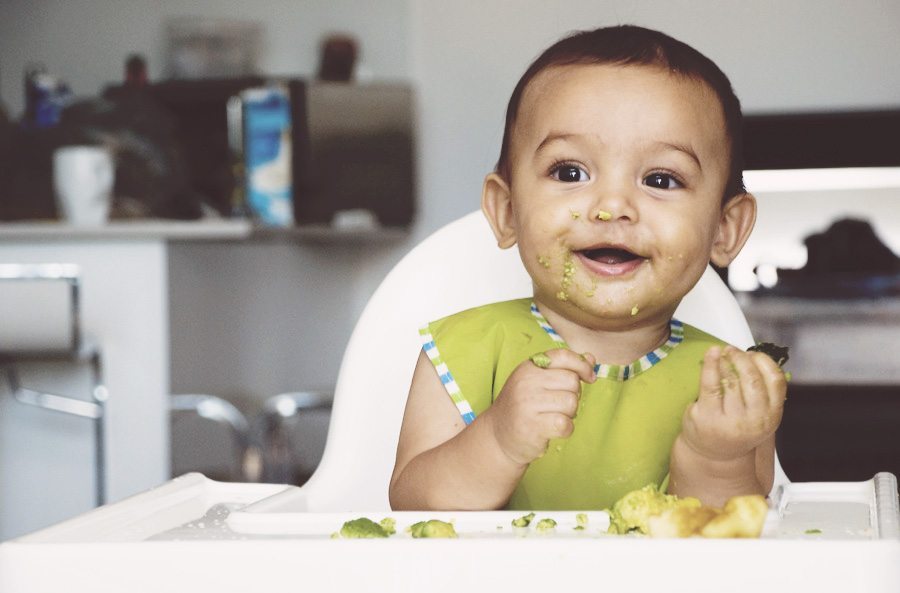 Most parents go about introducing solids to baby in the same way: by offering spoonfuls of mush as directed by the parent, on their schedule.

What parents don’t know is that this is a recipe for fussy-eating habits and dinnertime battles! Because of this, a growing number of children are becoming obese, and fast-food and other junk is becoming a common part of the average diet.

Baby-led weaning (BLW) is a growing trend that a lot of parents are getting into. What is it? It’s simply the concept of letting baby feed himself, while slowly introducing new foods to their diet alongside milk or formula. Many consider BLW as a superior alternative to spoon-feeding their child, and it’s fast-gaining a reputation as being the best way to instill healthy eating habits and attitudes from an early age.

The term “baby-led weaning” can sometimes be misleading to new parents. It doesn’t mean to completely stop breastfeeding or feeding formula; it means to start introducing solids.

The fundamental difference in baby-led feeding compared to regular weaning is the order children learn to eat. When feeding mush, the child first learns to swallow and then chew. But in BLW, the child learns to first chew, and swallowing comes later.

The benefits are numerous and can include:

When Is Baby Ready?

Experts suggest waiting until about 6 months of age before starting to introduce solids, but that doesn’t mean they’ll be ready exactly then. It’s best to keep track of the signs baby is ready and go from there.

Signs that your child is ready to start solids include:

What Are Good First Foods For Baby-Led Weaning?

Basically, any soft fruits or veggies that are easy for baby to hold onto make great choices for BLW.

It’s usually pretty obvious which foods should be avoided.

How To Do BLW

Here’s how to go about baby-led weaning!

You Can Always Take the Half n’ Half Approach

If you’re not totally sold on strictly baby-led weaning, you’re not alone. Some experts recommend doing BLW, but also mixing it up with spoon-fed purees, which might be more realistic for some parents. This is especially important, as the study I linked to showed that about 6% of children develop more slowly than others, meaning they pick up on BLW more slowly and end up malnourished.

Some parents are under the misconception that BLW should be completely hands off, and that doesn’t mean you should set food out in front of baby and walk away. A little encouragement and help doesn’t hurt at all, and it’s not going to be any detriment to the effectiveness of BLW.

It’s also very possible that your baby won’t get all of the nutrients she needs. By 6 months, babies need a lot of iron, and they won’t get enough of it from solely breast milk; they need food sources of iron. Since it’s very hard (if not impossible) for BLW babies to chew and eat meat, this can be a problem.

This is another reason why the half n’ half approach is good. Why not give baby a piece of cooked pork chop to chew on, but pulverize some to make sure they’ll eat some?

You don’t have to follow what BLW advocates say exactly. For many people, it’s just not realistic to never intervene ever in the feeding process. Some foods, like avocado are almost impossible for baby to eat with their hands, too. If they show an interest, you could help them with it.

Baby-Led Weaning & Choking: Is It a Concern?

You’re possibly worried, and rightfully so, about choking. The fact is that it’s always a concern, and it is possible for children to choke during BLW. However, it’s actually far less likely than by spoon-feeding them or putting pieces of food in their mouth!

The key to proper BLW is to give them larger pieces of food that they have to gnaw and chew on. What’s good is that the child will be physically unable to bite off a piece of food if they are incapable of swallowing it, which is kind of like nature’s way of protecting them from choking. If you give them finger foods or pointy stuff, that’s when the real danger happens.

Now, you should know there’s a difference between choking and gagging. Gagging is actually quite common during BLW, and it’s really nothing to be concerned about. It’s most likely going to happen and it doesn’t mean they’re choking; it helps them move the food around their mouth.

A first-aid course is a good idea if you want to be prepared in the case of actual choking. You can likely find one in your area, and some places offer specialized courses meant for babies and children. It could give you some piece of mind!

If you want to know the difference between choking & gagging, this video shows the common gagging reflex:

What Are The Downsides of BLW?

Of course, it’s not all upsides. The biggest downside and the one most people will tell you about right away is that it’s MESSY. At first food will be in their hands, on the floor, all over their face, maybe even all over you; pretty much anywhere but their mouth. This also means that there’s a lot of waste.

The messiness also makes it difficult to know exactly how much your child actually consumed. This is only hard at first, because over time they’ll eat more and more and have less mess.

Do you practice baby-led weaning and have some tips to share? How about a question? Feel free to let us know in the comments section below!