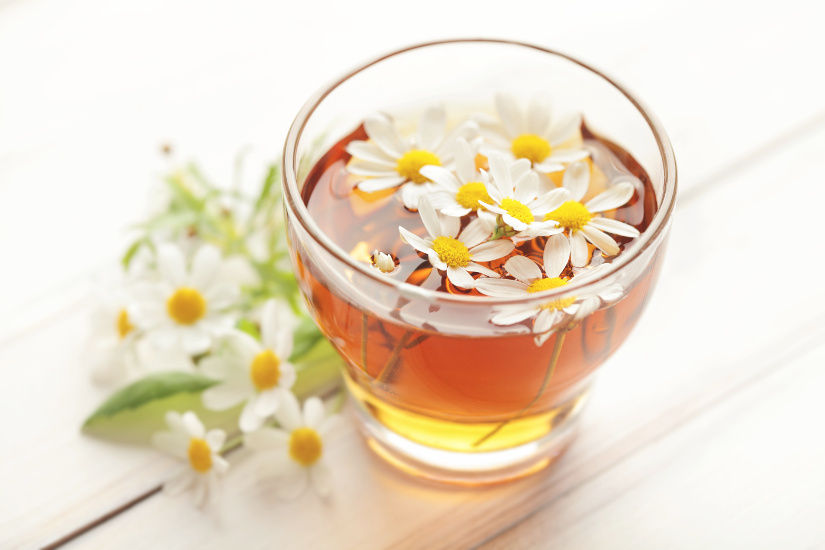 Despite the advances in modern medicine, many mothers, seasoned and new, are leaning more and more toward using home remedies.

Benjamin Kligler, M.D. says, even though they may not produce guaranteed, exact results, herbal remedies are all natural and tend to have significantly fewer adverse side effects than synthetic drugs offered in pharmacies and drug stores today.

These natural remedies are also typically more wallet friendly than conventional medications. Who doesn’t love to save a pretty penny? I know I do! Still, the question remains: “Is Chamomile tea safe for my baby?”

Recently I received a call from my local grocery store regarding a recall of certain teething tablets. I was relieved to find out it isn’t the brand I have been giving to little Marie, but it still caused me to worry since those tablets have been so effective at relieving her pain.

My sister, who works at a day care center, jokingly refers to them as “baby crack,” because of how much all of the kiddos she cares for who are teething also can’t seem to get enough.

Once again, this causes me to worry and wonder, “What the heck is in that stuff?” Needless to say, little Marie hasn’t been getting her fix lately, and I am instead considering opting for other more natural remedies such as Chamomile. Until then, it’s teething rings and watery juice popsicles.

As you read on, you will note a breakdown of Chamomile, along with cautions against the use of this herbal supplement, all of the benefits Chamomile has to offer, and my personal experience of giving the tea to my little Marie, followed by a closing statement.

Let’s break it down and see what exactly is in Chamomile that effects our bodies and our little ones. According to PubMed Central, the following is true:

Cautions Against Giving Chamomile Tea to Your Baby

WebMD touched on the topic in 2011, stating that new moms should speak with their children’s pediatrician before giving the tea to their little ones, with their concerns being the following:

Other potentially harmful ingredients may be in those tea bags such as possible trace amounts of metal, and

So, Moms, if you or Dad have been susceptible to either of these, TALK TO YOUR DOCTOR before giving this to baby. It may be safer to find another remedy for your little one’s ailments, instead.

To better assure there is no contamination, as WebMD warns about in the link above, and to avoid possible allergens, 1001TeaFacts.com recommends boiling the petals, leaves and stems of Chamomile flowers, directly in the water for about 10-15 minutes, and straining before serving your infant the tea (http://1001teafacts.com/chamomile-tea-for-babies-how-chamomile-can-benefit-your-baby).

TeaTalk.com also suggests with some caution, to slowly introduce the tea, as ingesting high amounts regularly may cause nausea and possibly even vomiting for adults and children alike. But be aware that this was reported by people who had not been using tea regularly and began drinking 3-4 cups every day. Therefore it is recommended that the tea be introduced to the diet slowly. Giving 1-2 ounces, with the bag steeped for 5 minutes, as recommended by Parents Magazine, should not cause any issues for baby.

The Surprising Benefits of Chamomile

Apart from these cautionary words, it seems chamomile tea can be rather beneficial for babies for a number of reasons, as noted on WebMD. It has been recorded all the way back to Ancient Egyptian times as a remedy for a wide variety of ailments, including the following:

It’s a mild muscle and neurological relaxant, which especially helps stressed or over-tired babies. It is believed that the flavonoids in Chamomile bind to receptors in the brain, causing mild sedation effects, helping to induce sleep.

It relieves abdominal pains caused by indigestion, colic, gas, and constipation. Due to its ability to relax muscles, this tea consequently allows the gastrointestinal tract to relax and better release stools and/or gasses caught in baby’s tummy, therefore causing a soothing affect.

The antibacterial compounds also help strengthen baby’s immune system along with helping fight already present bacteria that could cause croup – inflammation of the larynx, trachea and bronchial tubes in the throat and upper respiratory section in young children, which is associated with infection, causing difficulty breathing. (http://www.ncbi.nlm.nih.gov/pmc/articles/PMC2995283/) (http://www.medicinenet.com/script/main/mobileart.asp?articlekey=2875)

Many websites, including WebMD explain how it can also be used topically (http://www.m.webmd.com/a-to-z-guides/features/natural-remedies#3).

The following ways are just a few that may help baby:

I am a huge advocate for breastfeeding and give many kudos to the Mommies who figured it out with their babies from day one. But for me and my little Marie it took a lot of practice to get a proper latch, so by the morning following delivery I asked for the nurse to bring formula for my seemingly starving newborn.

She brought us Similac, so my husband and I thought it was a good idea to continue with it. After the first couple of months though, it was getting too expensive. I don’t know about you mamas, but I have never run across a Similac coupon.

Little Marie and I eventually got the breastfeeding down, but I still liked using formula at times as well. We ended up transitioning little Marie to Enfamil Supplementing formula instead, as it’s make up is so similar to breast milk.

Despite how wonderfully gentle the Enfamil was, little Marie still had gas and constipation pains during the transition. The suggested over-the-counter medicine was not helping to ease her discomfort. Then, my amazing mother-in-law suggested we try giving little Marie two ounces of Chamomile tea. We let it steep just enough to change the color of the water to a slightly mucky greenish-yellow and added a tiny pinch of sugar for taste.

That night, within just twenty minutes, little Marie started tooting away and eventually had two soiled diapers. Soon enough, our fussy baby was fussy no more. The next day she pooed one more time and returned to being the happy, silly, playful baby that she is. Since that evening, whenever we change her diet, or she is unusually fussy, we give her Chamomile tea, and it has worked for us every time.

Though some concerns may arise about Chamomile tea being given to infants, I believe as long as necessary precautions are taken, such as not giving more than the recommended dose and speaking to your child’s pediatrician beforehand, the benefits of this tea far outweigh the potential risks.

I believe it is worth giving a try, seeing as it has so few potential adverse side effects compared to its over-the-counter competition and has been trusted around the world for centuries as the “go-to” medicinal herb for quite the wide variety of ailments. But in the end that call is up to you, Mom. Do what you feel is safest and best fits your child’s needs.