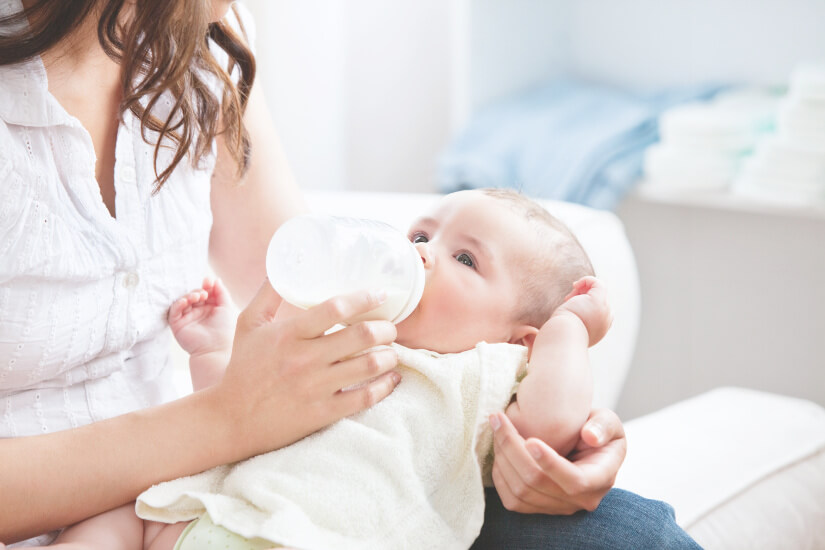 When Do Babies Hold Their Own Bottle? (Plus Tips To Help Them Do It)

When will you finally be able to go hands-free?
Total
4
Shares
4
0
0

As moms to newborns, we cherish every moment we get to hold our little ones, but after a while, we wonder…

“Will I ever have a free hand again? When will she hold her own bottle?”

While the average child begins to hold their bottle between 6 to 10 months, some babies may hold their bottle sooner. Others may hold it later. If it is later, don’t panic just yet! Babies develop at all sorts of paces and in many different categories.

Babies develop at different paces, and you should never jump to conclusions and worry about your child. My little Marie picked up on holding her bottle early on at 4 ½ months but wasn’t crawling until she was closer to 8 months. Some things just take more time than others.

My baby is 12 months and won’t hold his bottle. Is this normal?

If you are worried your baby may be underdeveloped, seek out your child’s pediatrician to get a professional opinion before jumping to conclusions. Your little one could simply not want to do this yet.

One mom in the Mom Answers Community on BabyCenter shared her method and experience with her son who she started teaching to hold his own bottle at just 2 months old! I’ll share the details later in the tips to help baby learn.

Others shared their experiences of their babies holding bottles between ages 3-5 months, others between the average 6-10 months, and still others who were 12 months and still wouldn’t hold their bottles.

Those who said their babies were 12 months and not holding still, explained that their little ones were “up-to-date” on every other milestone, they just refused to hold their own bottles. Between you and me those babies are the clever ones, getting mom to do their bidding for so long. Sneaky little squeaks.

The day I caught little Marie holding her own bottle, I was stunned. Not as much as I probably would have been had I known the average age for this milestone to be reached, but nonetheless, it really surprised me.

I was showing her how to hold her own bottle when I bottle fed (I’ll share how in a minute), but wasn’t expecting it to happen any time soon since she wasn’t showing any signs of picking up on this feat.

One day I was playing with her on the bed. She was propped up on some pillows and blankets with a couple of toys and her bottle. I put the bottle in her hands, but she wasn’t doing anything with it. I turned around to take a few bites of my cereal, and by the time I turned back to her she had the bottle propped up with one hand, drinking. She held it with her hand in the position of a finger gun.

I’d never shown her this, so for her to do this on her own and in such a manner had me jumping for joy. The word “Freedom!” sang in my head. Success at last… or so I thought. It still took her another month or so to really learn to hold it and bring it to her mouth.

It was still relieving for me to know I had the option of free hands again, even for just a moment.

How have others helped their babies learn to hold their own bottles?

As I mentioned earlier, one of the moms on the Mom Answers Community shared how she helped her son hold his own bottle. Here’s how she did it:

“In Oct ‘09 @ 2mos old, when feeding him, I’d put his little hands on the bottle & gently hold them there with my own hand… I wouldn’t “make” him keep his hands there, but I’d hold them as long as he wanted.

Around Christmas time, he started reaching for the bottle anytime it came within arm’s reach, and by mid-January, he was jerking the bottle out of your hand & feeding himself.

He would usually miss his mouth 2 or 3x at first, but he always got it. :) It was wonderful to have him doing this, because he could feed himself from the bottle in his Bumbo chair, bouncy chair, etc.” – kristi57

I used a similar method with little Marie.

I would put her hands on the bottle, hold them there while she sucked a few times on the nipple, and would slowly lower the bottle to get her to use her own hands to push it up so the milk would flow through.

Another mother on Health Boards’ message board mentioned that she would put her babies in a supportive seat and help prop the bottle up a little with a blanket, just to help hold the weight.

This helped her children get used to holding the bottles until they were strong enough to hold them on their own. She says, though, she would never leave them alone when propping the bottle on the blanket; this ensures the babies don’t choke on the milk, or worse, drown in it.

This brings me to techniques that should not be practiced or should be chaperoned with complete attention given to baby.

What not to do.

No two babies are the same.

Babies develop differently and learn in different ways. Though there are certain necessary steps to take, there are many ways to help baby learn to hold the bottle independently. So keep trying until you find one that works. Be patient. Enjoy watching your baby grow and continue to encourage him in every development he makes. I promise, it’ll be worth it.

At what age did your babies begin holding a bottle on his or her own? What are some methods you have used? What worked and what didn’t? Let me know in the comments below!