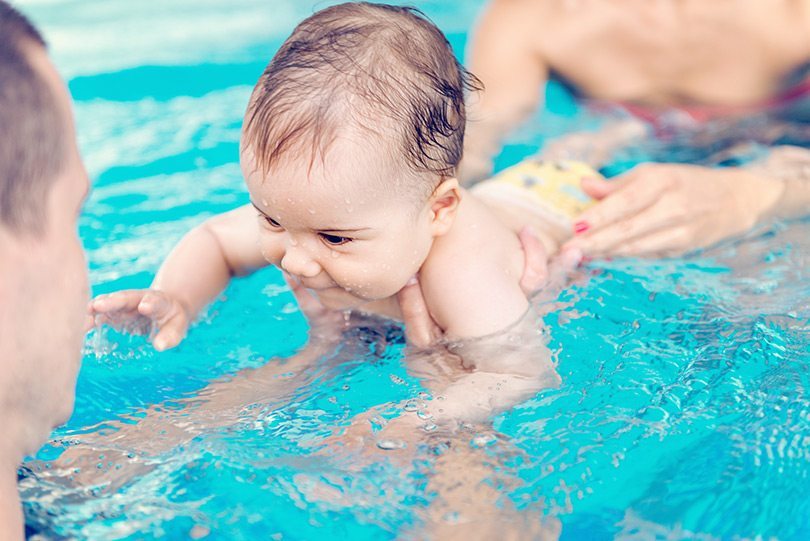 What’s the difference between a regular diaper and a swim diaper, I hear you ask?

The main difference is that regular disposable diapers contain water crystals (sodium polyacrylate) which are meant to absorb liquids (like pee). This is fine and dandy for regular use, but if you put one in the pool, it expands and puffs up like a puffer fish.

And then they wouldn’t hold in any of the good stuff anymore.

A common misconception is that swim diapers should contain pee. That’s simply not true, and believe me, you’re going to get peed on if you use swim diapers.

Their main function is to hold in poop solids, to avoid a “poopy in the pool” scenario, which isn’t fun for anyone. Especially the other people at the pool.

You really have two choices here.

Option one is disposable swim diapers. They’re basically just your typical disposable diaper, but with a few changes to make them suitable for a pool.

The downside to disposables is that you’ll end up going through a whole pack of them during a day trip at the beach. They also aren’t very useful outside of the pool for regular use, because they aren’t at all absorbent.

They will hold pee (maybe) but one little poop and they sag a lot.

They also seem to be a lot harder on baby’s tender bottom, especially when you factor in sand friction, if you’re at the beach.

Option two is reusable cloth swim diapers. This, in my opinion, is the best option.

They’re not only way more cost-effective, but they tend to be way more gentle on baby’s bottom. They don’t stretch out and chafe like plastic disposables.

If you’re into the whole green movement, reusable diapers are obviously a lot more eco-friendly, too.

On the downside, it can be a pain to haul a pile of soaking wet, possibly-poopy cloth diapers back to the hotel or home.

I still think they’re a much better option, though.

The most important thing when it comes to buying a good, dependable cloth swim diaper is that it’s tight. If you get one that’s too big, it’s just not going to work properly, and leakage will happen. Trust me.

The most popular brand, and one of the oldest, is i. play. (Click here to see them in all 16 designs and colors!)

They make two versions: pull-up and side-snap. Let me just say that changing a poopy diaper that has to be pulled off is just… not fun. Go with the side-snap ones if you value your sanity.

They’ll last an entire summer if you treat them properly! It’s nice because they’re not very expensive at all.

The only real downside is that they’re not as tight as some of the other diapers available on the market, because you can’t tighten them up at all. Even still, you shouldn’t experience any poop leakage, as long as you have the right size diapers.

One side note: don’t trust the size chart on Amazon’s site; it’s incorrect. The proper chart is:

While they’re obviously not meant to hold in pee (like all swim diapers) they do contain a bit if necessary. But don’t expect them to function like a regular diaper, because you’re going to end up with a pee disaster everywhere if you do.

What’s confusing to me is that the packaging says it’s machine-washable, but the tag on the diaper itself says to hand wash. I tried machine washing them and it seemed fine, but it’s probably not a good idea.

On the downside, these are pull-ons, which isn’t the best to deal with in the case of a poop accident.

These are newer on the market, and they’re really cool. Why? Because they’re adjustable; one-size-fits-all! Click here to see them all!

There is an adjustable snap you use to tighten or untighten the diaper along the sides, and another one to adjust around the groin area. While the description does say that they’ll fit even large babies, I find that they run a little small, so beware if your child is 25+ lbs.

Unlike the previously-listed diapers, these are 100% machine washable and dryable, which is convenient. Just make sure you wash/dry them alone and NOT with your other clothes.

All in all, they get the job done well and a lot of moms seem to really love them, especially compared to other diapers.

A smaller Canadian company with a huge mommy following, AppleCheeks make a nice little swim diaper that a lot of parents love. Click here to see them in all the different designs!

What I like about these ones is that they work for smaller babies than most: size 1 is designed for 7+ pounds, but I find they run a bit small (like most swim diapers).

What’s pretty cool is that these are the only diapers in the list that have NO negative reviews online! All of the others have a few people complaining about leaks or other problems, but I couldn’t find a single complaint about the AppleCheeks diapers.

There are two sets of adjustable button snaps, which not only make it really easy to get it off and on (especially in the case of an accident) but it also means the diaper can be resized along with your child’s growth. To a point. Don’t expect it to last forever, but do expect to be able to adjust it a little bit.

I personally HUGELY prefer buttons to velcro snaps. Velcro diapers seem to cause a lot of chafing that’s hard to avoid, but that’s not an issue with button-up diapers.

As far as functionality, they seem to be a super comfortable and functional diaper. They keep the poop in, the elastic bands on the legs keep it tight enough, but don’t expect it to hold in pee.

These are a decent budget diaper, but not as good as the rest on the list, in my opinion. But they’re still pretty good. (Click here to see them in all 18 designs and colors!)

I’m not a big fan of velcro, but these both velcro AND ties, so it’s pretty snug and secure. The construction is surprisingly solid for what amounts to a pretty inexpensive diaper, which is nice.

The sizing tends to run small compared to what the manufacturer suggests, so if your child is somewhere around the borderline between 2 different sizes, you should probably go with the larger size. They are somewhat adjustable, so even if they’re a tiny bit too big at first, you can tie them and make them more snug.

Some parents complain that they don’t last more than one season, but does that really matter? They’ll have long outgrown them by then, so the only real downside is if you expected to hand them down to another child.

I think these are pretty decent for a budget swim diaper!

What About Disposable Swim Diapers?

If you don’t want to go the reusable route, you have two main options in disposable swim diapers: Huggies Little Swimmers and Pampers Splashers.

I personally recommend going with the reusable ones if you plan on going to the beach or pool more than once or twice this summer, but I suppose disposables are an option if you won’t need them much.

Honestly, both the Huggies and Pampers options are just about the same. I think it comes down to personal preference, and whether you prefer one brand over the other.

Check With Your Pool’s Rules

Public pools have their own rules on babies in pools and what they need to wear. Some pools don’t allow children at all if they’re not potty trained. Others require a swim cover overtop another diaper. Just check with your pool’s specific rules.

This might be an outrage at first, but you have to understand that it’s for safety reasons. A 2012 study by the Centers for Disease Control and Prevention found that 58% of the public pools they tested were contaminated with E. Coli.

How does E. coli get in the water? From poop.

If your child is sick or has diarrhea, please keep them out of the pool. Not only is it embarrassing, but a poop accident is going to ruin the day for everyone, and they’ll have to shut down the pool for everyone for a few hours to clean it up and cleanse. Don’t be that mom.

Some people might be ready to send me hatemail by now, but really, this is all for safety reasons. I’m just as annoyed as anyone by stupid, restrictive rules, but E. Coli is no joke.

I have a few general tips for using swim diapers:

Swim diapers are an absolute necessity if you want to take your son or daughter to the beach or pool this summer!

While I personally recommend going with reusable swim diapers, disposables are also an option that might be better suited to some people. Especially if you don’t think you’ll be going to the beach or pool very often.

If you have any questions about swim diapers, please feel free to ask me in the comments below!

Don’t Miss The Rest of My Summer Safety Series!

Summer is a fun time, but there are a lot of dangers and concerns during those hot (and sometimes wet) months.

The other articles in my Summer Safety series:

Read More
One poop blowout explosion is too many.
Read More
1
0
11