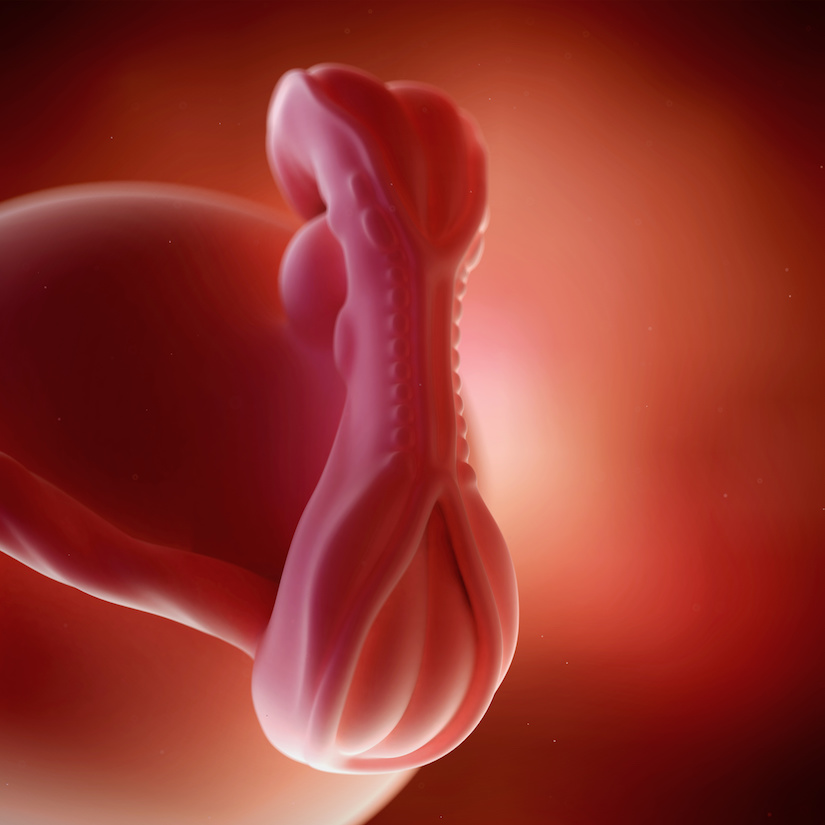 What To Expect When You’re 5 Weeks Pregnant

At 5 weeks pregnant, you might have just discovered that you have a bun in the oven. Even so, your tiny baby has been hard at work for a while now.

This week’s development surrounds the heart. And, as you know, hearing your baby’s heartbeat for the first time can be life-changing.

So, let’s dive right in!

How Big Is Baby at 5 Weeks?

More than anything, the focus of your baby’s growth is on developing vital organs rather than increasing in size. So, the changes might seem to be a little minuscule. But, significant changes are happening nonetheless.

Many exciting transformations are taking place for your little one. This week, a tiny heart and circulatory system will begin to form.

In fact, that tiny heart will actually start to divide into chambers that will beat and pump blood. This big development, in turn, allows you to hear your baby’s heartbeat for the very first time via ultrasound or fetal doppler monitor.

Some muscle and skeletal structure will begin, as well. As with most new fetal development, though, it will take several more months for full formation.

Tips For a Healthy Pregnancy at 5 Weeks

Although you might not look much different to the outside world, there’s a strong chance that you already feel different on the inside.

It’s important to pay attention to your energy level and slow down when you need to.

Fatigue will likely influence you for the duration of your pregnancy, so it’s best to strategize a way to cope early on. For instance, take frequent breaks, nap in the afternoon, or go to bed earlier.

Morning Sickness – While morning sickness or nausea typically appears before the 12th week of pregnancy, it’s slightly uncommon to experience it before the 6th week.

Even so, your pregnancy is like a snowflake in that it’s unlike anyone else’s. Therefore, it might be beneficial for you to stock up on crackers to help settle your stomach.

Also, an empty stomach is usually an upset stomach when it comes to pregnancy, so get in the habit of keeping a snack on-hand.

Diet – No matter if you’re a health nut or eat pizza seven days a week, now is the time to make some changes to your diet.

Your baby is depending on you and only you for nutrients. Plus, your post-pregnancy body will undoubtedly thank you.

Some areas that most women tend to address are increasing their water intake as well as upping the amount of fruits and veggies they eat.

At this stage, making those two big changes could mean the difference between healthy and unhealthy weight gain further along in the pregnancy.

Habits – Some bad habits might bring a sort of comfort to you as a mom-to-be.

Though, many of these same habits are anything but harmless to your baby. Smoking, alcohol, and illegal drugs all need to be removed from your life immediately.

These habits will hurt your baby by causing physical birth defects, mental disabilities, or a life-threatening low birth weight. Cutting back on even less damaging habits like caffeine and refined sugar would be a great idea as well.

How Many Months Is 5 Weeks?

You, new mama, are officially one month pregnant! The reason is that most doctors begin the pregnancy countdown from the first day of your last period.

As with most new mothers, your lingo will likely change from using the term “months” to referencing everything in “weeks” (or even days).

Please be confident in knowing that this is perfectly normal. After all, things for you and your baby are changing and changing fast.

Although it’s not as common to have an ultrasound at week 5, yours will probably mirror the following pictures if an ultrasound is what you and your doctor choose to do.

Even if you’ve only known of your pregnancy for a hot minute, there’s a good chance that you have a few “big belly outfits” on your shopping list. Of course, this too is very natural.

After all, dressing a changing body can be both fun and challenging. It’s essential to practice self-love, be flexible, and wear that crazy outfit if you want to.

For now, though, your belly isn’t quite to epic proportions just yet. In fact, your belly is probably not a whole lot different than it was pre-pregnancy.

In the coming weeks this will change, of course, so take a good at your toes while you can still see them.

5 Weeks Pregnant: Symptoms and Changes in Your Body

Even though it doesn’t look like much is happening on the outside, your body is a factory of changes and transformations. Soon, you’ll start feeling the impact of this grandiose metamorphosis.

Hormones – For starters, the amount of hormones flowing through your body has significantly increased.

As you may know, home pregnancy tests detect the presence of human chorionic gonadotropin (hCG), an early pregnancy hormone. Should you take a pregnancy test now, it will likely turn positive very quickly.

Appetite – You might have already noticed a difference in your appetite.

Maybe you enjoy grazing more than full meals or possibly get hungry in the middle of the night. And further still, you might have a complete aversion to some foods you previously craved.

Pregnancy does funny things to a woman’s appetite, and it can start early on, so you’re in good company if you’ve already noticed some of these changes.

Bladder – Many assume that frequent urination only occurs later in pregnancy when your baby is large enough to put pressure on your bladder.

This isn’t the full story. The need to pee, for pregnant women, can be likened to the need to eat. When you’ve got to go, you’ve GOT to go. It’s not uncommon for this annoying pregnancy feature to begin this week and last until delivery.

Breasts – Tender breasts are sometimes the very first little sign that a woman is pregnant.

Even before a missed period, her breasts might feel abnormally sore or even tingly. You might start to see a darkening of your areola or the area around the nipple, but it’s not a guarantee.

Bleeding – Seeing blood in your underwear can give an expecting mother quite the scare.

But, there are times when it’s normal to see blood during pregnancy. For instance, as the egg implants into the side of the uterus, there is often light bleeding.

Because the uterus is so rich with nutrients, the egg implanting acts as a sort of disruption to the uterine lining. Implantation bleeding is usually light, watery, or pinkish. The most common name for it is “spotting.”

It often happens about 6 to 12 days after ovulation/fertilization, which is why it’s commonly mistaken for early period blood.

Double the babies means double the hormones. But, you probably won’t know that you’re carrying twins until you see your doctor. The first prenatal appointment is typically scheduled for week 8, so you might be flying blind until then.

For now, expect common pregnancy symptoms like fatigue and appetite changes to be more intense. Carrying more than one baby will specifically impact your pregnancy later on.

Dyanne Harvey is a freelance copywriter from Illinois, covering topics such as insurance, finance, and healthcare. Paused indie musician and proud mama with wanderlust in her heart, she's always on the lookout for her next adventure.