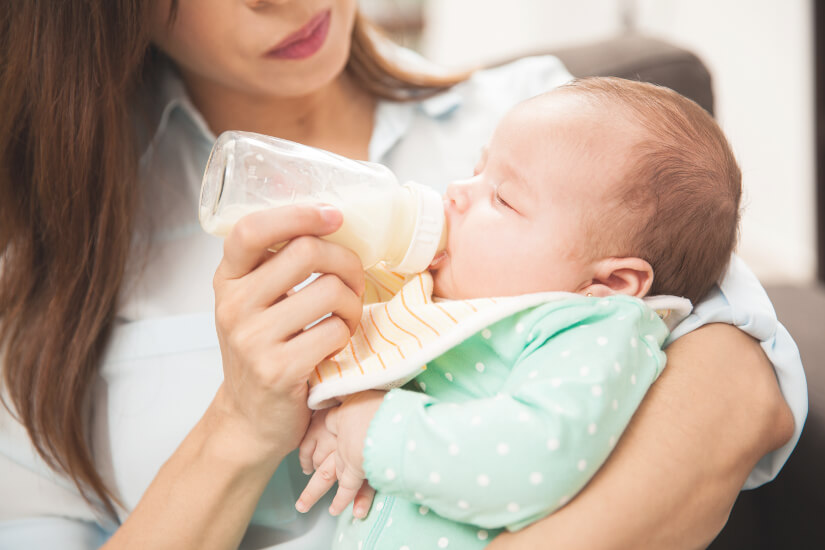 How To Get Rid of Baby Hiccups Quickly, Effectively & Easily

Hiccups can be a neat experience for any mom to feel while her baby is in utero, just like feeling kicks and movement. It’s exciting and reassuring to feel your growing baby! But once your newborn is here, hiccups are kind of miserable for him.

I think, most importantly, we as moms want to know: do they hurt our baby?

And, could we be doing something differently to decrease their frequency?

Well, don’t fret; it’s likely not something you are doing to cause them. As we know for ourselves, hiccups can come and go mysteriously, and without warning. We can, however, determine what they are defined as, look at possible triggers, and explore some ways to help your newborn..

Have you ever looked into what causes hiccups? I know for myself, I am kind of familiar with what might bring them on for me, but I have never really looked into what defines them until now.

Hiccups are not painful and,if anything, they can just be a small annoyance. Scientifically, they are caused by an involuntary spasm or contraction of the diaphragm with quick closing of the vocal cords, causingthat “hic” sound.

My son never cried as a result of hiccups during his newborn or infant stages. Sometimes his hiccups would last for what I thought was a while (maybe ten minutes), and I remember specifically asking his pediatrician if this was normal because he was my first child and I was not sure.

He did assure me that it is normal for newborns and infants to get hiccups because their digestive tract is still developing.

I tell my parents of newborns that, like sneezing, hiccups are a normal reflex which occurs during the first few months. I explain that they are not painful or bothersome to their infant, and there is usually no need to “do something” to make the hiccups go away. Here is a link from the AAP about normal newborn movements.
Dr. Leah Alexander, MD, FAAP

Now that my son is two, he rarely gets hiccups.

Things that can trigger hiccups.

Knowing now that newborns and infants likely have more of a sensitivity to hiccups due to their new and still-developing digestive system, we can dive into what some possible triggers are.

As adults, we can experience hiccups when we chew gum, drink carbonated beverages, and eat too fast (gulp in too much air). We do not have control over hiccups, as they are partially controlled by the autonomic nervous system, which also controls things like our heartbeat, pupil dilation, and other involuntary bodily functions.  An article in Bioessays explains hiccups further.

Other potential triggers of hiccups in adults include: overeating, spicy foods, hot liquids, and drinking alcohol which causes acid reflux.

Newborns don’t have access to all the potential triggers adults do.

Newborn hiccups can be triggered by:

While growing up and getting hiccups as a kid, I remember hearing of ways to get rid of them such as holding your breath, eating a spoonful of sugar, hanging upside down, or eating some lemon.

Those remedies have not been proven to work and they are not exactly baby friendly. When I get hiccups, my go-to remedy is to relax and breathe in and out as calmly and slowly as possible. They usually subside shortly after.

Here are some tips for what we can do for our little ones to help stop hiccups before they start.

My son suffered from reflux, so I quickly learned that I needed to burp him way more often than the average baby to avoid a huge spit up disaster.

He was born pre-term (by a little more than 5 weeks early) so his digestive tract was more on the sensitive side. He required two medications to keep his food intake down and the reflux under control.

Along with the medications, I would feed him about two ounces max, then burp him. I took my time burping him which at times prolonged his feedings, but it also eliminated any excess air in his belly. I noticed less spit-up mishaps once I did this. Any excess air in the belly distends the stomach which can potentially cause hiccups.  The AAP has more information about infant reflux:

I’m not going to say this cured all hiccup and spit-up episodes for my son. There were still some nights that, no matter what I did, he’d lose his whole bottle and end up with hiccups. But, it noticeably reduced the frequency.

If your baby overfeeds, the fullness can distend the stomach too fast which in turn can cause your baby’s diaphragm to go into spasms.  Cleveland Clinic has some advice on how to avoid overfeeding your baby.

Your best bet is to feed your baby less and twice as often. This may be a trial and error scenario for you as you learn what your baby’s triggers are and what methods work best for him.

If you are breastfeeding.

Breastfeeding is not an easy task to master. Some moms and babies get it down and some don’t. An important part of deciding whether or not  to continue to breastfeed is to make sure your baby has a secure latch. Unfortunately, this was something my son and I struggled with.

If your baby does not latch well, he may be sucking in too much air which in turn can distend his stomach, irritate his diaphragm, and cause hiccups. This does not mean that you should give up on breastfeeding right away. Most hospitals offer the help of lactation consultants who can coach you on how to practice the perfect latch with your little one.

Be sure to listen to your baby while he feeds. Listen for gulping and how quickly he is eating and sucking in air. If you hear these things, you may need to reassess his latch and confirm that his lips are tightly sealed around your areola, not just the nipple.

Bottle feeding has its specifics too.

A way to avoid an overly hungry baby who may want to gulp down his food or cry because he is upset is to learn his hunger signals.

Watch for your baby’s cues such as smacking or licking his lips, opening and closing his mouth, or sucking on his lips, tongue, hands, fingers, etc. You can also keep an alarm on your phone or a feeding log to ensure you’re feeding him right before he gets really hungry.

Another way to prevent air from settling into your baby’s stomach is to keep him sitting upright for a good 20-30 minutes after his feeding.

This will allow his food to settle and keep air bubbles from integrating into his tummy. Also, avoid any type of bouncing movement or high-level activity shortly after he eats.

Once the hiccups have started.

If hiccups start during a feeding.

Try to take a break from his feeding, sit your baby more upright, and rub his back.

Your goal would be to try to get your baby to feel relaxed which in turn should hopefully calm his diaphragm and his hiccups. Also, sitting him in the upright position while feeding will help keep excess air towards the top of the stomach for easy release while burping.

Hiccups without a recent feeding.

If something other than a feeding has triggered and upset of your baby’s diaphragm, try to keep him relaxed and let the hiccups  run their course. Just as easily as hiccups come, they can fade away.

Call the doctor if…

If your baby’s hiccups persist for over 20 minutes or up to 48 hours, it may be best to contact his pediatrician as it might be a sign of gastroesophageal reflux or GER.

GER is common and, from experience, a temporary condition where babies regurgitate their stomach’s contents up into their esophagus,  causing pain and hiccups.

This occurs because the muscle between the esophagus and stomach (lower esophageal sphincter) is relaxed in newborns. It tightens and prevents regurgitation in most infants by 6 months old, but not until 1 year of age in others.
Dr. Leah Alexander, MD, FAAP

Physicians can provide you with options available to your baby to make this phase more tolerable.

Every case will be different as not all children are the same. Unfortunately, my son dealt with reflux symptoms until he was about seven months old. His case was more severe in that he would projectile vomit his entire bottle.  This contributed to his hiccuping episodes and suffering.

It was painful to watch him suffer like that, especially because he would soon be hungry again. We had to adjust how much he was fed, how often he was burped, his formula brand and type, and have him sleep on an incline (the Dex Baby Safe Crib Wedge worked well for us).

I definitely had to pace his eating as well and monitor his feeding cues. Thankfully, he outgrew  spit ups and hiccups, but it took time and patience on the part of all of us. .

The bright side of hiccups is that they are never life threatening or painful. There are more severe situations such as chronic hiccups, persistent hiccups, and intractable hiccups, but these are rare in infants.

Leah Alexander, M.D. FAAP began practicing pediatrics at Elizabeth Pediatric Group of New Jersey in 2000. She has been an independently contracted pediatrician with Medical Doctors Associates at Pediatricare Associates of New Jersey since 2005.